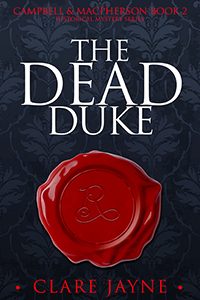 “The Dead Duke“, the second novel in my Campbell & MacPherson historical mystery series, is now available for pre-order and will be released on 7 November.  To celebrate, “Lady Tinbough’s Dilemma“, the first book in the series, will be free to download from Amazon between 3 and 4 November, while the new book’s pre-order price is at a third of its usual price – just £0.99 (US: $0.99) – right now.  Once released, “The Dead Duke” will sell at £2.99/$2.99 so don’t miss this special offer.

Here is the book description for “The Dead Duke“: When Ishbel and Ewan take on the case of a duke supposedly murdered by his actress mistress, Lady Huntly threatens to disown Ishbel while Edinburgh’s upper classes are appalled, and that is before the duo even begin looking into the reasons why the wealthiest members of society might have wanted the duke dead.

“Lady Tinbough’s Dilemma” has been given 5 stars at Amazon and reviewers have said: ‘I could not put it down. The character development was fantastic and there was the right amount of internal dialogue and action. I cannot wait for the next installment!‘ and ‘This was a well-written book that kept my interest. Ishbel Campbell and Ewan MacPherson are a great team‘.