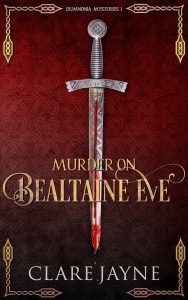 When I decided to begin writing a new historical mystery series I researched various eras before settling on Dumnonia in the Dark Ages.  I didn’t make things easy for myself as this took a lot of research, but it was a tribe and an era that I really fell in love with.

Dumnonia was part of England and home to the Celtic Dumnonii tribe in the Dark Ages.  It was mentioned by the Romans during the time that they ruled England and seems to have been self-governed then.  It expanded after they left, taking over extra land while other tribes were falling to Saxon rule and it lasted until the 8th century AD.  It was located in the south-west in the area that later became Cornwall, Devon and part of Somerset.

A lot of its wealth came from its tin mines, but the Dumnonii also traded by ship with other countries in different parts of the world.  There are various ideas about what its name means, but no definite answer, so I chose one possibility I thought would be interesting, where the tribe worships Domnu, a sea goddess.  My main character in the books is one I’ve created:  Morvoren, the priestess for the tribe, so she has a close connection with Domnu.

Little is known about the way of life within Celtic tribes at this time as they kept no written records, so most information comes from accounts either written by their enemies or written centuries later.  This is why this time period is less often written about than many others, but it gave me leeway use my imagination when I worked out the social structure for the tribe.

One of the reasons the Romans were said to have considered the Dumnonii barbarians was that they treated women as equals, which is something else I make use of in my books.  Where other societies of the time were starting to treat women as inferior to men, it’s interesting to contrast that with a Dumnonii society with women who hold high ranks.

You can find out more about my Dumnonia mystery series at Amazon here.