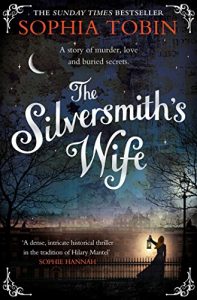 The Silversmith’s Wife by Sophia Tobin is a mystery novel centering around the murder of a silversmith and showing the various characters who might have killed him.

It is written in third person omniscient style, moving in and out of the heads of a lot of different characters, which can initially make it difficult to remember who is who, but it’s worth persevering as it’s beautifully written.

The writer has the challenge I’m currently facing with the book I’m writing of having a detective novel based in the Georgian time period when there was no police force in Britain, so the usual style of police investigation can’t happen.  Those characters in the book who are interested in solving the murder have their own personal reasons for doing so, making it more of a psychological character study than a crime drama.

The novel also looks at the absolute control men had over their wives in this time period, in this case with destructive consequences.

I would give The Silversmith’s Wife 4 stars.  It is very well written and the characters are vividly brought to life.  My only issue with it is that the Kindle version has about a dozen errors in it which, given that it has a traditional publisher and should have had professional editing, is really poor.  Other than that, I strongly recommend it.