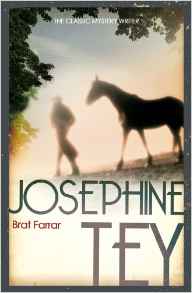 “Brat Farrar” is a book I loved as a teenager so re-reading it is always like a home-coming. The title character is a young man convinced to impersonate Patrick Ashby, the heir to the Latchetts estate, and Brat is increasingly caught up in trying to discover what really happened to Patrick, with deadly consequences.

This is a fast-paced psychological mystery novel with well-rounded characters. It paints a slightly nostalgic, romantic view of middle-class English life common in a number of Josephine Tey’s books, which might well be explained by the author’s working-class Scottish background. She was just beginning to make a life for herself in England when she was called back to Inverness to look after her widowed father and remained living there for the rest of her life. This romantic image of England was often a part of crime fiction of the time, also used to great effect by such writers as Agatha Christie and Dorothy L. Sayers.

Josephine Tey doesn’t shy away from showing character flaws, though, English snobbery and a sense of entitlement a part of this novel and others.

“Brat Farrar” is an excellent mix of tightly-written plot and interesting characters against the beautifully evoked backdrop of the English countryside. It has an entertaining mystery and characters you are left thinking about long after finishing the book.