In the film of Roman Polanski’s Macbeth (1971), Francesca Annis appeared as Lady Macbeth sleepwalking in the nude. Polanksi’s collaborator, Kenneth Tynan, tried to justify this by arguing that it was historically correct that people in 11th century Scotland slept naked; but that did not convince the reviewers.  For many of them, this Lady was less Shakespeare’s murdering minister, more the product of a particular 1960s phenomenon. Hugh Hefner, the Playboy mogul, had financed the film. So it was assumed that Annis had been cast at his instigation and her nakedness was conditional. As a result, one reviewer dismissed her as ‘a spot-crazy Playboy bunny’.

Still, it has to be said that this film does have a distinctive Sixties vibe – ‘Mick Jagger Macbeth’ as one academic called it – which fits in beautifully with a character who ‘struts and frets his hour upon the stage’. So much of what we now associate with the Sixties lingers in the film’s afterlife: the fresh-faced youth of the film’s protagonists; stories of the avant-garde, saucy intellectualism of Tynan; and Polanksi’s own revelling in the lifestyle of Swinging London. So it is understandable if the film is seen as ‘of its time’, another cinematic experiment of an artistic new wave.

However, it is possible to see that the scene is not merely another example of 1960s counterculture. Polanski has not included a nude scene simply because the relaxed mores of contemporary creative expression meant that he could. It’s not just another case of classic Sixties exhibitionism. Our attention is not gratuitously drawn to Lady Macbeth’s nakedness as it is, say, in Barbarella. Quite the contrary: what is important in Annis’ scene is not what we see, it’s what we don’t see.

Some critics have argued that our sight of Lady Macbeth’s nakedness is symbolic of her vulnerability. This would suggest an appeal to our sympathy. Not so. As Annis moves through the scene, our view of her is mostly obstructed – which would preclude any association of her nudity with defencelessness. The staging of this scene ensures that we do not get physically near Lady Macbeth. The initial sight of her is through a wooden screen that blocks our full view of her face. When she moves, she walks away from the camera, toward the far left-hand corner of the screen. There are two other people present, who cross right in front of her. They are seen in closer view than she. Once Lady Macbeth has moved away, she mostly stays away. There are only two moments when she is at the forefront and dominates the screen: once when she is seen washing her hands, and again when she moves toward the camera for ‘a soldier and afeard?’ She remains on the left of the screen, in profile, clutching at the wall hanging wailing that ‘all the perfumes of Arabia / Will not sweeten this little hand’. Even then, Richard Pearson, as the gossipy old physician, undercuts the tragic sense of this sight with his ever-so-slightly salacious enjoyment of the revelations made – ‘Well, well’.

Other than these two moments, every time she starts to, or looks as if she is going to make a move toward us, she is restrained – first by the physician, then by him and the gentlewoman (Patricia Mason), both of whom hold more of our attention in their running commentary on the action. Polanski ensures that we never get too close to Lady Macbeth. There are few close-up shots, and an object or at least one other character stands between us, so she cannot approach us, nor we, her. The effect of this is to keep us separate from her emotionally. Subliminally, despite her child-like voice and tears, we are prevented from empathizing fully with her and pitying her despair because we are not allowed to get close enough and instinctively offer comfort.

Surprisingly, this, too, is characteristic of the Sixties: just not the aspects of that era that tend to spring to mind. By the end of the decade, disenchantment had begun to set in. Those who had enjoyed the swinging era had done so, not just because there was a relaxation of post-war constraint, but because it brought with it a promise of social and political change. At the latter end of the decade, a perceived lack of such change led to disillusion. In Polanksi’s case, this was brought sharply into focus when his pregnant wife, Sharon Tate, was murdered by the followers of Charles Manson in 1969, bringing, for many commentators a symbolic, as well as chronological close to the decade. This intrusion of visceral reality into the Sixties dream is marked in Polanski’s version of the sleepwalking scene. In the sight of the naked Lady Macbeth and the prevention of our close engagement with her is an expression of the whole decade: the heady promise of freedom and the events that served to curtail it.

Rebekah Owens is a writer on matters literary from the Renaissance to the Romantics. Her new book on Roman Polanksi’s film of Macbeth represents a rare excursion into the twentieth-century. 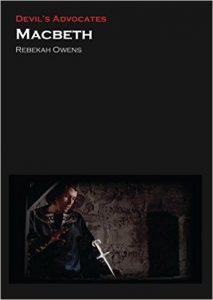 Why write about Roman Polanski’s Macbeth (1971) as part of a series of books dedicated to the classics of the horror movie genre? Because, Rebekah Owens argues, just as Banquo in Polanski’s film holds up a series of mirrors that reflect images of his successors that trace back to his own son Fleance, so subsequent milestones in the genre show their lineage to this work, their originator. Polanski had previously made Repulsion (1965) and Rosemary s Baby (1968), so he was fully aware of the conventions of the horror genre and this film provides clues to his own horror lexicon. The author demonstrates how Macbeth can be read as part of the British Folk tradition, strengthening the reading of the film as a horror movie in its own right through its links to The Wicker Man (1973), Blood on Satan’s Claw (1971) and Witchfinder General (1968) then argues the case for its recognition as a horror movie even further, by connecting it to the later American horror classics, such as Halloween (1978). This analysis will also provide an opportunity to explore the popular associations made between the film and Polanski’s own life and argue that they endorse the view of the film as a horror. This book, then, represents the first, serious attempt to regard Polanski’s Macbeth as a horror film in its own right, and not exclusively as one of a multitude of ongoing Shakespeare film adaptations.

‘Devil’s Advocates: Macbeth’ by Rebekah Owens is for sale from 21 July and is available for pre-order at Amazon here or at Columbia University Press here.